GREETINGS FROM DJOLIBA!
An American Village 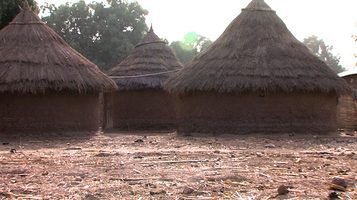 At the height of the Cold War America was trying to win the hearts and minds of people around the world by giving stuff away.  In the 1960s America gave a small village in Mali the gift of suburbia. More accurately they came up with an “experimental” project to replace traditional adobe and thatched-roofed huts with buildings that looked more like the typical American styled homes, although admittedly very stripped down, barebones versions of those homes. And thus begins a comedy of errors and miscalculations all taking place in the small village of Djoliba. 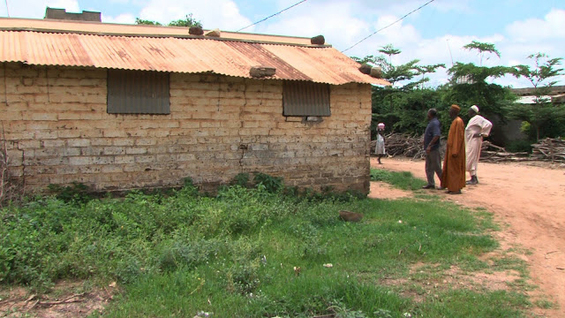 One of the America designed houses in Djoliba.
The thick-walled adobe huts with insulating roofs of thatch which provided relative cool comfort during the brutally hot weather of the Malian dry season would be replaced by thin, brick buildings with shiny sheet metal roofs. It would have been a clever design if you were trying to build a solar oven. The design issues don’t end there however. Each family in Djoliba would be given a new American style house in exchange for a community effort with construction guided by American advisors.  Sort of a Habitat For Humanity well before anyone came along with the idea. The big problem for this experiment that ultimately led to it being discontinued was with the definition of “family.”  In the US during the 1960s an average American family consisted of 3.67 people. And so the houses to be built in Djoliba would be 3 bedrooms; mom and dad and a bedroom for each kid. Worse case scenario, the third and fourth kid could double bunk. According to the project’s own survey and with some very basic calculations it’s apparent that the average Djoliba family at the time consisted of 9 people. And frankly, from experience 9 is even way too small. Malian families are large. Very large.  If you count children from multiple wives, members of the extended family like aunts, uncles, grandparents and even grown, married children with their children you could be looking at a small enclave. In fact if anyone were to stroll through a traditional Malian village the first thing you would notice is that it is broken up into family “compounds” made of several huts gathered together, perhaps as many as a dozen or more, housing many people. 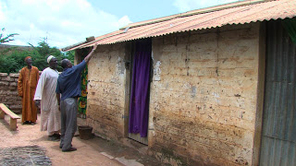 The "White House" in Djoliba.
The old houses were torn down as the new were built, a tumultuous process, which if occurred anywhere in the US, would have resulted in the total demise of the community at the very least. Yet despite this tremendous misadventure of the well-meaning Americans, the people of Djoliba persevered, adapted, adopted, incorporated and in many small ways prospered. They are proud of being a part of that American project. They are proud of their friendship with the Americans and to this day, with a little smile, they call themselves “An American village.” 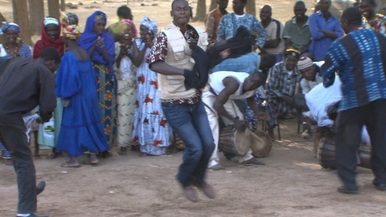 “Greetings From Djoliba” is a film about an amazing group of people reconnecting with their past as well as looking to the future. In the film we get a sense of life around the world during the 1960s, and specifically in the village of Djoliba. Through excerpts from the historic Hermon Davis’ film we get to see the new village in construction. We began shooting in Djoliba in 2010. Through our footage we meet people who were part of the American project. We hear their stories on how they adjusted to life in the “new” village and how that brief contact with the Americans changed the village and the lives of so many people. I personally get a sense they wouldn’t have missed out on being a part of the “experiment” for anything. The one question I kept hearing and is still with me is, “Hey, when are you Americans coming back?”